What's the Difference Between TrueType and OpenType Fonts?

More than half the world’s population uses fonts daily. Most people don’t care about the internals, but some want to know if there is a difference between TrueType and OpenType, or if they can decide what font is best based on the file extension.

This article aims to debunk the myths and misinformation about font formats that circulate on the Internet. For example:

Let’s start with some relevant definitions and background information about scalable font technology:

Adobe launched PostScript Type 1 in 1984. It became very popular among desktop publishers but is being phased out for over a decade.

TrueType was invented by Apple in the late 1980s as a competition to Adobe’s PostScript Type 1. It is available since 1991 (Apple’s Macintosh System 7). Apple licensed TrueType to Microsoft for free and it became available on Microsoft Windows 3.1 in 1992.

In 1994 Microsoft developed TrueType Open. It was further improved jointly by Microsoft and Adobe to become OpenType in 1996. It is an extension of the TrueType font format retaining its basic structure and adding many data structures to prescribe typographic behavior, such as ligatures, small caps, and old style figures, which allow font creators to design better international and high-end typographic fonts. While TrueType only allowed for TrueType outlines, OpenType also supports Compact Font Format based outlines (CFF is a variation of Type 1 fonts). OpenType solved many compatibility issues between Macintosh and Windows computers. Multiple Master support in OpenType has been discontinued as of version 1.3 of the specification, but since 2016 it supports font variations (see below).

An OpenType Font Collection (formerly known as TrueType Collection) is a means of delivering multiple OpenType font resources in a single file structure.

In 2016 support for font variations was added to the OpenType specification. It allows multiple font faces within a font family in a single font resource, thus for example thin, regular, bold, and heavy along with condensed and expanded can be included in a single font file, and additionally, it allows for continuous variation along the included design axes. The outline format can be either TrueType or CFF based, but for CFF based a new internal CFF2 table has been introduced for variable font support. Since this CFF2 table is not backwards compatible, most font designers make TrueType based variable fonts.

You can argue if OpenType fonts are all TrueType fonts containing additional data structures. We prefer to see OpenType as a new format, sure it is based on TrueType, but it is not the same.

If you agree to this definition, then it is safe to say all modern computers mainly come with OpenType fonts. There are still numerous old fonts floating around the Internet that internally include only the data structures as defined in the original TrueType font specification, but it is best to avoid them as they no longer meet today’s design standards.

If you want to keep using the term TrueType for all OpenType fonts, then what’s the use? It won’t clarify a thing.

If you want to call fonts with TrueType based outlines TrueType, and the ones with CFF based outlines OpenType, then that is plain wrong. Don’t do it, instead read this article again. 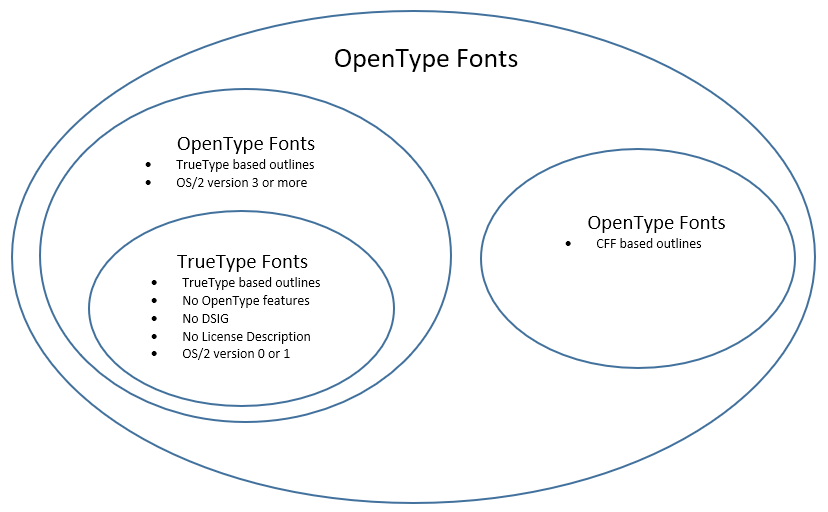 Both PostScript Type 1 and TrueType fonts are no longer made. All newly released fonts are OpenType fonts, period. But why do people still refer to ttf and otf?

Probably because they think you can distinguish the internal outline format based on the font’s file extension. This is plain wrong, so let us explain it.

Some 25 years ago Microsoft thought it would be wise, mainly for compatibility reasons, to continue to allow the original TrueType font file extension “ttf”, but only for OpenType fonts with TrueType based outlines. A new font file extensions “otf” was introduced and is allowed for both font flavors.

Here is what the official OpenType specification has to say about this:

“In all cases, software must determine the kind of outlines present in a font not from the filename extension but from the contents of the file.”

Font vendors usually provide several font resources to choose from. This make it hard to tell which one you should use. So, what is important?

Rasterizers take the glyph outlines and output them on a device. How good the output looks mainly depends on the rasterizer, the outlines, font size, and optional hinting. Fonts usually look great on a high-resolution monitor and when printed but can look bad when viewed in an outdated web browser. So, what quality font and what outline format you need depends on your needs.

Another very important part of a font is the OpenType features, as those enable text-processing applications to improve text layout. Several of these advanced typesetting features are vital for complex script fonts like Arabic, while other features are used in desktop publishing and typesetting software like Adobe InDesign to activate specific character variants as available in the font. Not all software supports all OpenType layout features, so not all features are accessible in all software.

Here is a technical summary of internal font tables that identify specific characteristics of fonts:

As all this information is deeply buried inside the font resources, it is way more convenient to use a font manager like MainType: 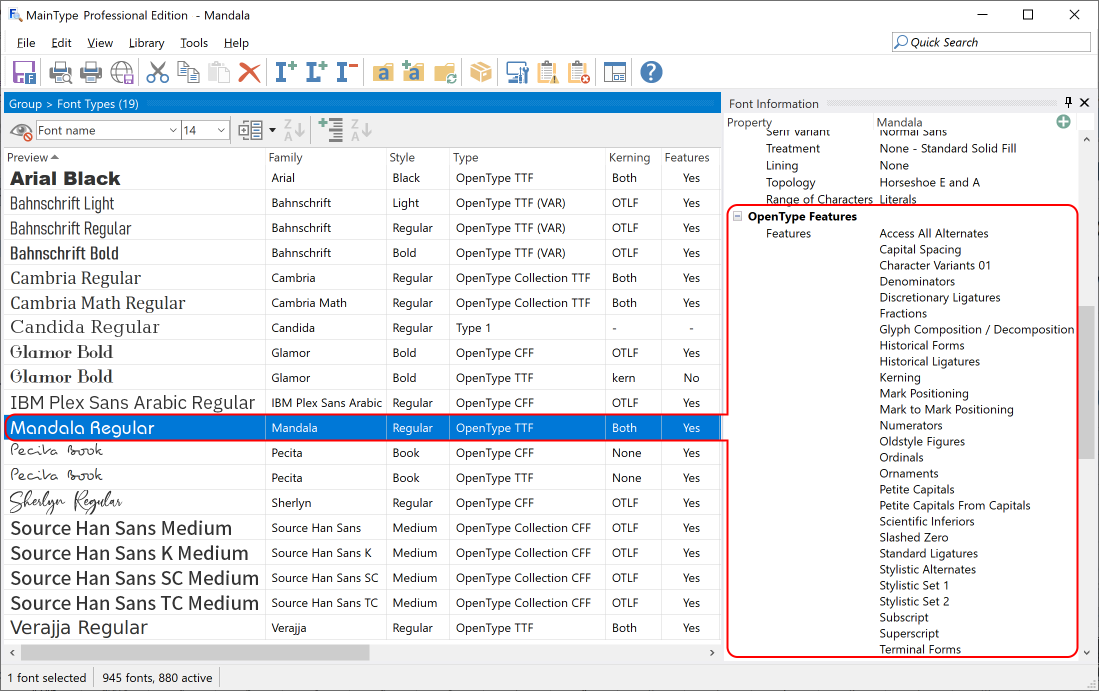 You can then ensure you are using the most recent version of your fonts that come with the most up-to-date OpenType layout features.

If people tell you to use OTF over TTF, they probably don’t know what they are talking about. If they refer to file extensions, or OpenType versus TrueType, or the internal outline format (TrueType based outlines versus Compact Font Format outlines), point them to this article, as that is not what OTF and TTF is about. If they want you to use fonts containing OpenType layout features, then they should talk about that.

Pure TrueType fonts are legacy and should be avoided. We like to compare TrueType fonts with a square, and OpenType added an apex on top of it. With this new dimension it turned the square into a pyramid. Sure the base is still a square, but when you see a pyramid, would you call it a square?

So, font file extensions mean nothing. You need to investigate the font internals to ensure what outline format is used and what OpenType layout features come with the font. We recommend using a font manager like MainType to inspect your fonts. When you have the option to choose between a font with TrueType based outlines and one with CFF based outlines, take the one with the best language support, and sufficient OpenType layout features. If you work with Word, it is wise to use OpenType fonts with TrueType based outlines, as those can be embedded in exported PDF documents.