We have just released FontCreator 14, coming with several improvements and new features that will help you build awesome fonts.

This new release of FontCreator fully supports variable fonts, offering you more flexibility to design and generate font families. Variable fonts are supported by all major web browsers and more and more desktop software adopt this technology. FontCreator is the only font editor that natively supports this technology, as it is fully integrated into the core of our software. 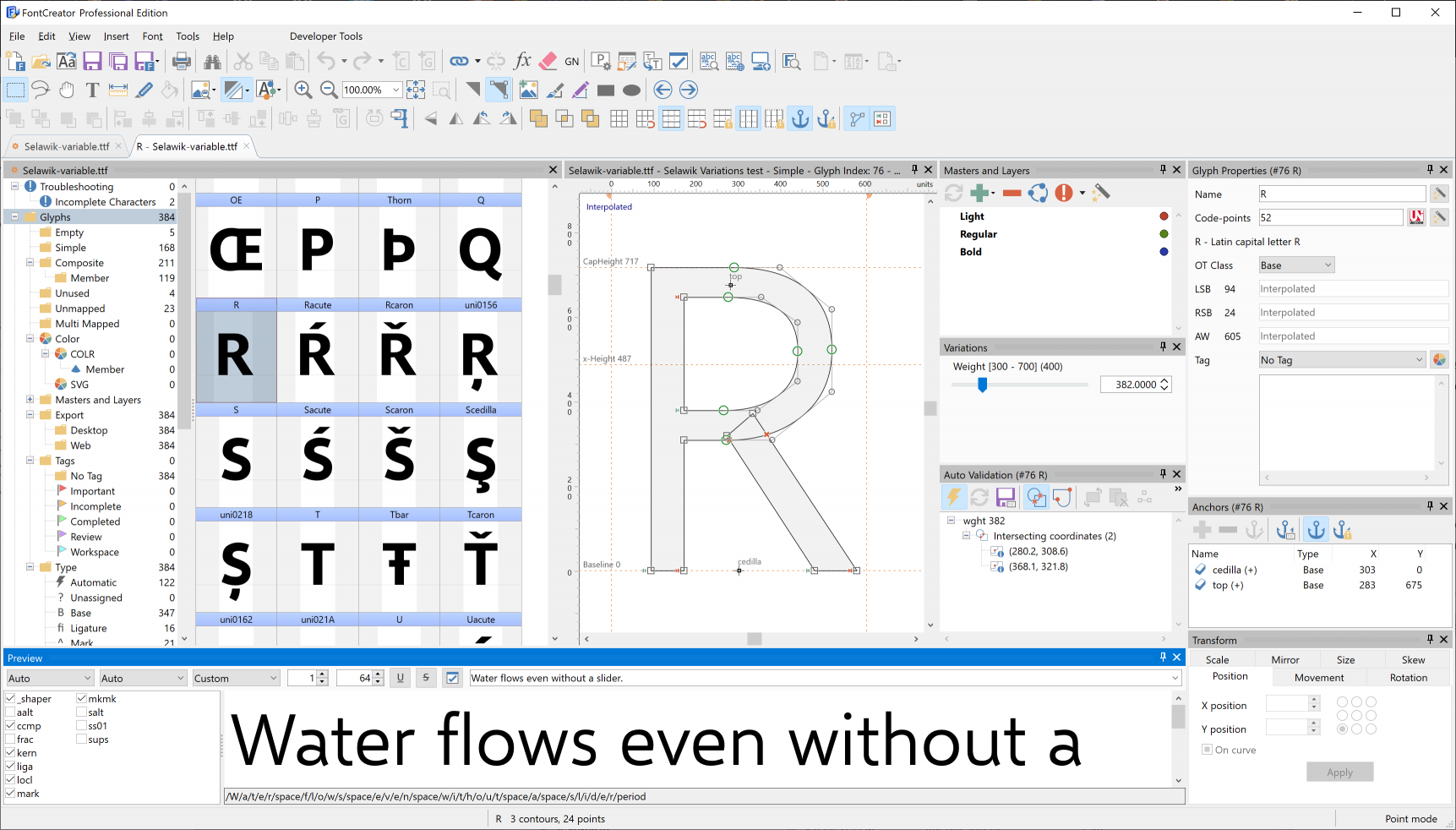 A variable font contains one or more axes (like weight or width) which allow a continuous range of style variations. In general, a variable font is a (subset) of a typeface, as it combines font styles into a single resource, but there is one catch. The outlines need to be compatible, otherwise variations cannot interpolate. FontCreator allows you to easily combine your existing non-variable fonts into a new variable font as it comes with tools to locate and fix compatibility issues.

Here is an online tutorial that should get you started: How to Make a Variable Font

FontCreator is a “what you see is what you get” font editor, so you can proof and test your fonts while making changes at the same time. The OpenType Designer comes with an interactive proofing tool, so you can instantly see how your input text is processed by our shaping engine, revealing all features and lookups that are applied. For most fonts this is sufficient, but no worries, as with one click you can test your font in external software and even in a web browser. Right out of the box; amazing!

For more than 20 years FontCreator used floating tool windows, but it was time to replace those with dockable panels. Our font manager MainType also makes use of these panels, so you are probably already familiar with this layout. This change also allowed us to add support for themes, so you can now switch to a dark theme. The comparison tool dialog has been replaced by a Text Tool feature within the Glyph panel. The good old Font Properties dialog is turned into a panel, which makes editing font properties more convenient.

With variable font support we also made sure FontCreator can import and export a Designspace document along with Unified Font Objects. This allows you to share your (variable) font projects with other font designers in case they use another font editor.

The Glyph panel always allowed you to show a background image, which is useful if you want to trace an outline. In addition to this, it now also supports a mask, which is basically a vector-based background. It allows for even more precision when you want to refine your glyph outline. The OpenType Designer now has an option to show the anchor cloud while working on your mark-to-base, mark-to-ligature, or mark-to-mark lookups. We have even implemented Variable FEA Syntax for glyph positioning (as proposed by Simon Cozens).

We have heard rumors that some font designers use a Mac. Even though our software is made to run on Windows, there are ways to use it on a Mac.

Running FontCreator on a Mac

FontCreator 14 has all the tools that you need to create professional fonts, so what are you waiting for?

You can download FontCreator 14 from our download page. Please use our forum to discuss the new features; enjoy!