We're proud to announce FontCreator 12 as it includes several major improvements and new features that will help you build awesome fonts.

The most impressive improvements are:

FontCreator has been using friendly glyph names for a long time, but it never fully used the power of it. With this release we've further improved friendly glyph names, which also allow smart feature generation based on glyph names and their suffixes. A new glyph sort (design mode) sorts glyphs in categories, which allow you to better concentrate on specific groups of glyphs. 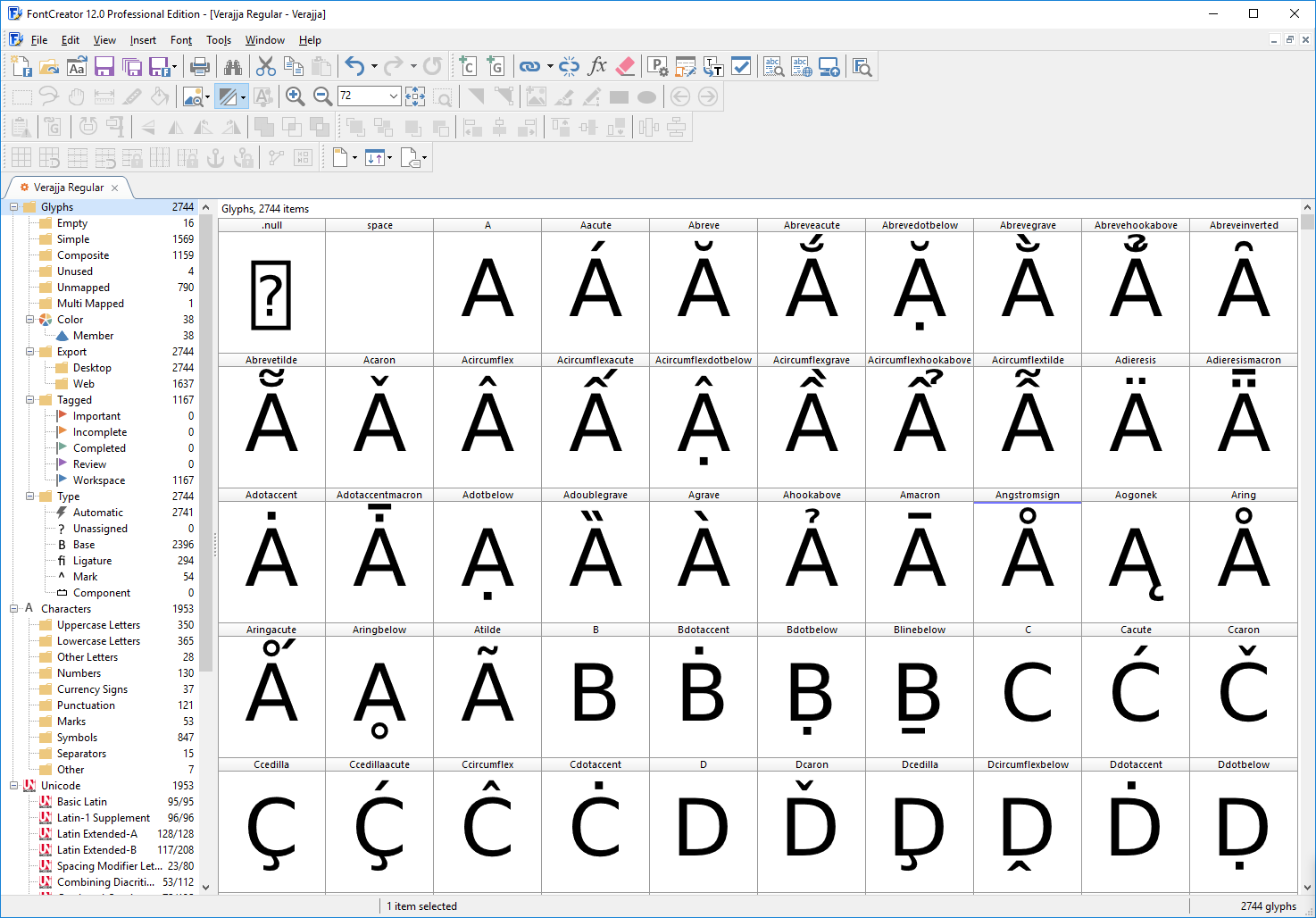 Besides automatically creating kerning pairs for pair adjustment lookups, FontCreator can automatically add numerous other OpenType layout features to your font. Within the OpenType Designer window click the first icon from the upper left corner. You will now be able to select which features you want to generate and/or update. The generator heavily relies on glyph names, so ensure your font contains glyphs with friendly glyph names as explained in the user manual. 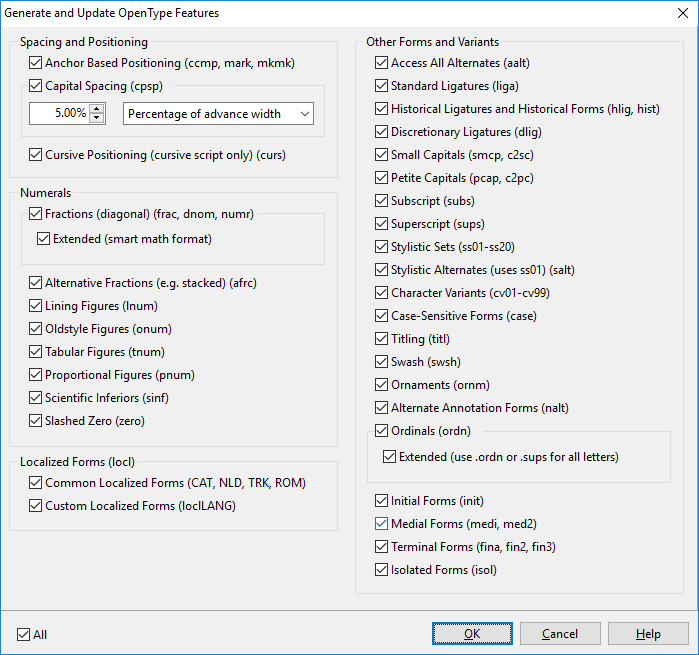 The Benefits of Anchors

Using anchors to position mark glyphs with respect to mark and base glyphs has several benefits, especially in combination with auto attach, as then changes to your base and mark glyphs instantly update your composites, taking into account both outlines and anchor positions. The new feature generator adds all required lookups and features for anchor based positioning; supporting special marks for upper case glyphs, narrow glyphs, and more. The tutorial Latin Diacritical Marks - Accents explains how to add support for Latin diacritical marks in your fonts. 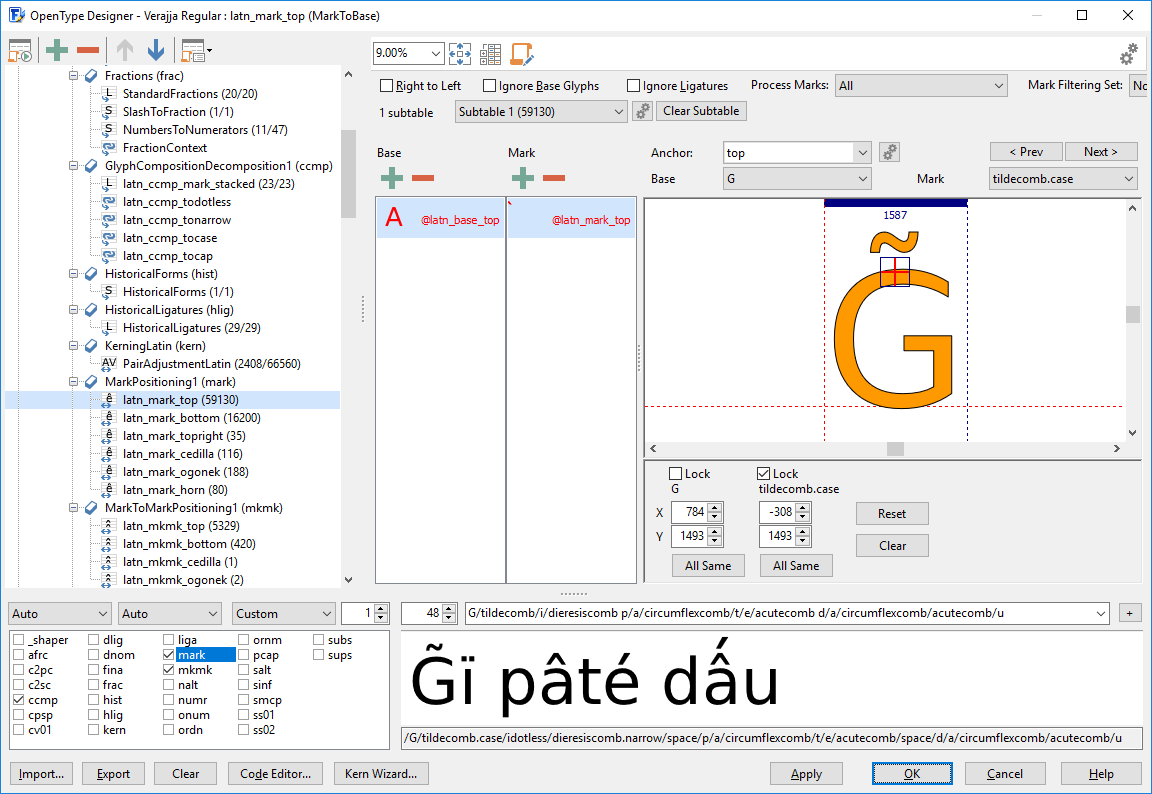 The enhanced Insert Glyphs dialog supports formulas for generating the glyph outlines as a composite. It is based on anchors, so ensure your glyph members have appropriate anchors. The metrics of the composite glyph will also be calculated, and available kerning between individual glyphs will also be applied. Just provide the glyph name, followed by an equal sign and the glyph names separated by a plus sign. Don't use spaces as that would be treated as a new glyph you want to insert. Here is an example:
f_i_j=f+i+j
It will add a glyph named f_i_j and will make it a composite that is made out of these glyphs: f, i, and j.

You can also use such a formula on an existing glyph. Select Custom Formula from the Edit menu.

Within a glyph edit window, you can enable the Comparison toolwindow. You can then, while holding down the Alt key, click any glyph to switch to it. This allows you to quickly switch between glyphs within a single glyph edit window.

This new release comes with many more improvements, like a new window tab bar, extended reopen menu, snap to guidelines for anchor movement, enhancements to transform scripts, support for glyph ranges in glyph transformer, and much more, as explained in the user manual, as available from the support page.

You can download FontCreator 12 from our download page. Please use our forum to discuss the new features; enjoy!